From Hobart we drove to Strahan on the west coast of Tasmania, which took us nearly five hours.  We stopped a couple of times, including in Queenstown which was a booming mining town during the early 1900’s.

The impact of logging and copper mining in Queenstown was startlingly awful on the surrounding hills which are often described as a barren and brutal moonscape. It’s hard to imagine the lack of foresight as trees were stripped from the hills that were once a rainforest, and as copper smelters led to acid rain. But it is easy from my pampered position to look back and say those things.

The town itself had a surreal and guilty beauty from an artist’s view, as it is still full of stunning old buildings from its heydey, and yet there is almost no-one to be seen. That feeling of walking almost through a ghost town was something we experienced quite a few times during our last few days in Tasmania. Admittedly it was a long weekend, and I’m a city girl, so the quiet was even more pronounced. I did keep thinking ‘oh, what an opportunity to just sit and draw” but there is really a limit to how many hours I can ask even the very, very patient Stephen to wait for me!

We arrived in Strahan mid afternoon after the final sick making mountain roads that curved and swerved their way from Queenstown (eerrrk I can still feel it). We walked down to the water and sat on an empty dock, and I whipped out my sketchbook. Half way through came the hazards that urban sketchers come to fear and expect – erratically moving people!! A group of rowdy young guys who may have imbibed a beer or two (think in terms of a rugby trip) started leaping in and out of the water and kicking up a ruckus. A better urban sketcher than I would immediately have started to capture them in a sketch, but I had already drawn the boats behind them and thought we could wait them out. Well we did – but then not one, but TWO, big cars pulled up and parked right in front of us!! Sigh … needless to say, just as I gave up and packed away my things the cars moved …. sigh again …

We only had a couple of days in Strahan and the weather wasn’t looking good. Stephen booked us on a Gordon River cruise while keeping a sharp eye on the weather predictions. It was pricey but we felt we couldn’t come all this way and not see the Gordon River.

I wanted to remember all the stories, so I jotted snippets into my little sketchbook as fast as I could. The one that really touched me was the story about a shipwreck in 1907 when the lighthouse keeper’s wife and children drowned as he could hear them calling out for help. Just heartbreaking. You can read a newspaper article from the time here. 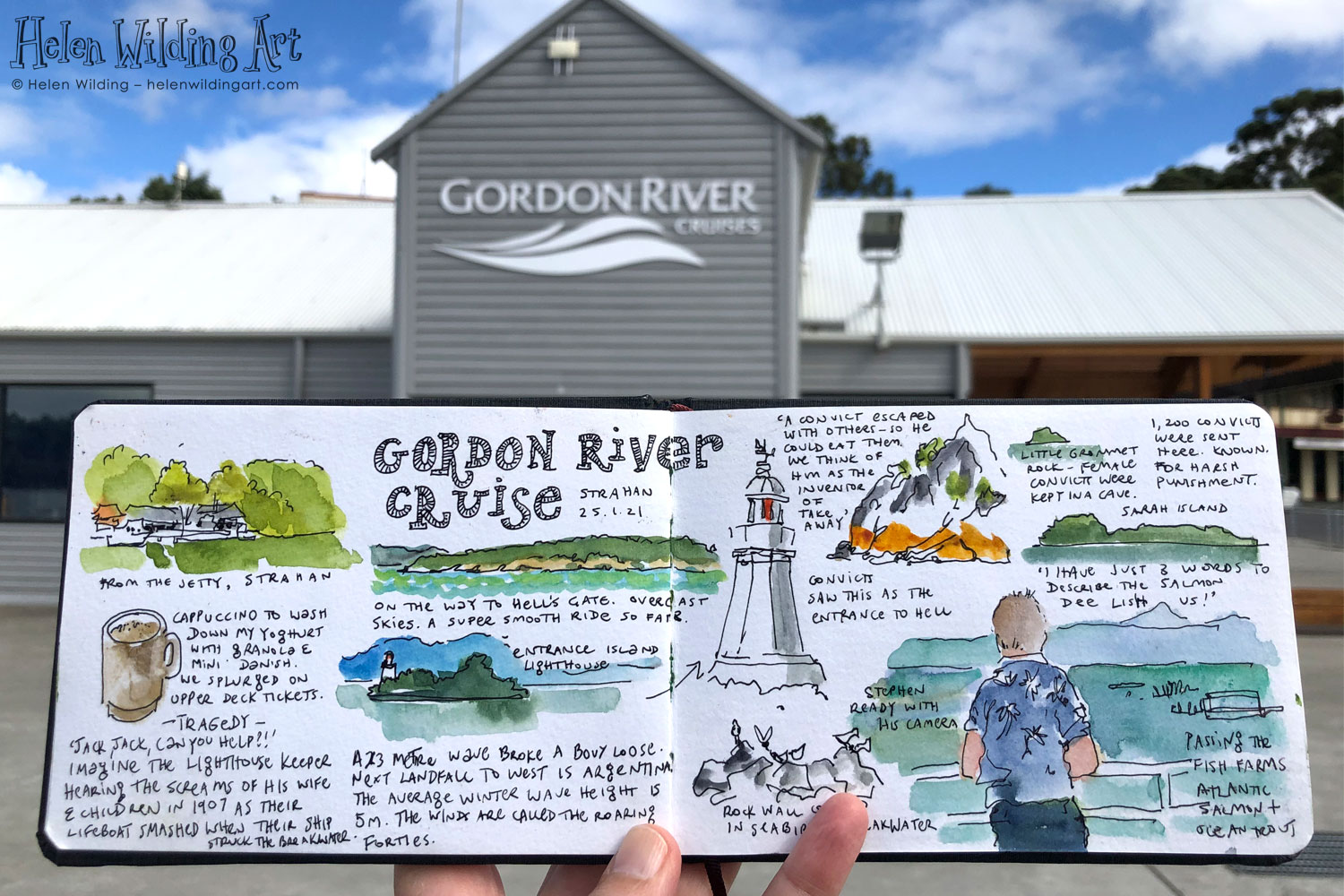 I initially thought I’d draw the scenery, but let’s face it – I’m not really a landscape artist. Instead my attention was caught by this enormous camera a fellow tourist was lugging around with her. I don’t know how she ever lifted it up, but it made me feel like I was travelling light with my watercolours! 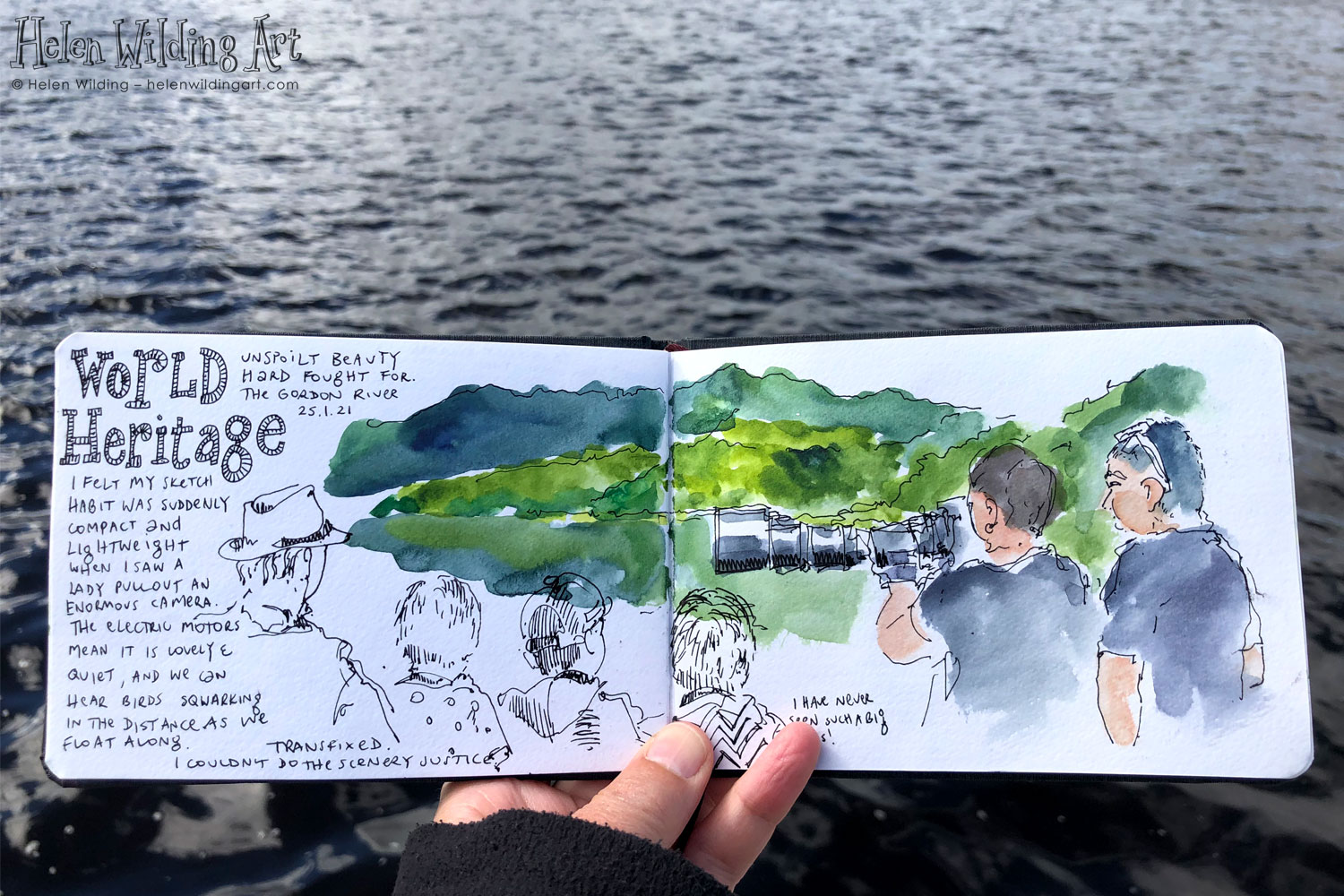 Should I feel bad that I enjoyed drawing the people on our cruise as much as the scenery? It’s rare to have a group of people standing still for so long, and I thought that their poses told a story of their own. The scenery was indeed wild and beautiful, and the reflections in the water reflected the trees and the sky as the birds called out, uninterrupted by other noise.

This photo was taken back in Strahan and not in the Gordon River. I was trying to be inconspicuous. So you’ll have to imagine the scenery. Sorry. 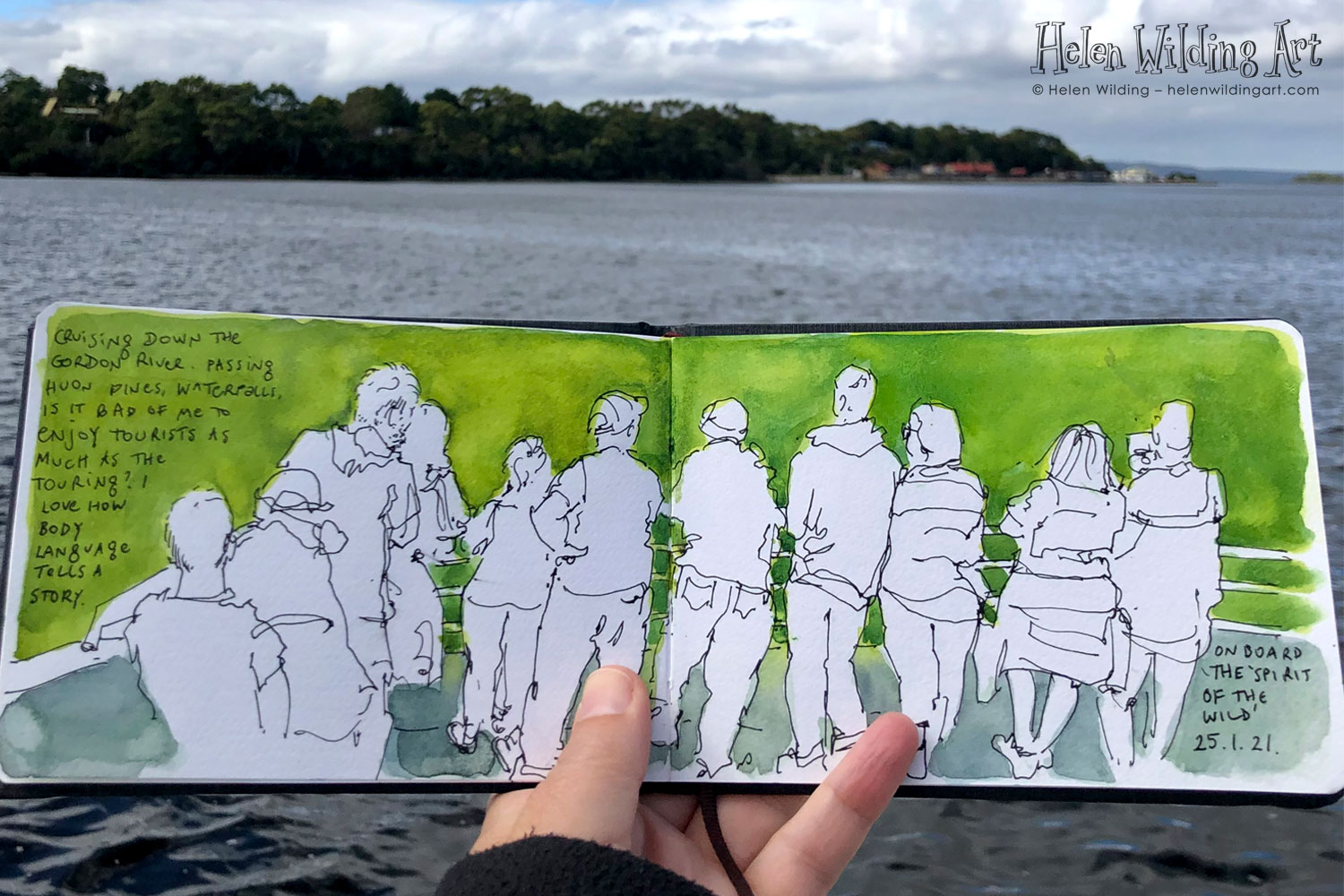 We had a couple of walks ashore. We stopped to walk amongst the trees, and I drew a black tiger snake who was posing in the soft reflections of the canopy – safely out of bite range. It’s not a very exciting sketch though because I didn’t stay long for obvious reasons.

I enjoyed the proudly over acted tour of Sarah Island and the stories of the hardest of the convicts who were banished there. We learnt about the whippings almost to death, the solitary confinement (because putting the first 8 women ashore on a rock to separate them didn’t count as solitary), the cold (they chopped down all the trees that offered any protection from the winds and then had to build 10 metre walls around the island), the corruption, riots and blackmail, and the eventual finale as a surprisingly successful shipyard. But, alas, at this stage the weather caught up with us, the thunder rolled and the rain pelted down.

I thought I had been drawing stealthily, but clearly I wasn’t as I was contacted a week or so later by someone who was inspired to pick up her own sketchbook after seeing me drawing on the cruise. That’s about as flattering as you can get 🙂 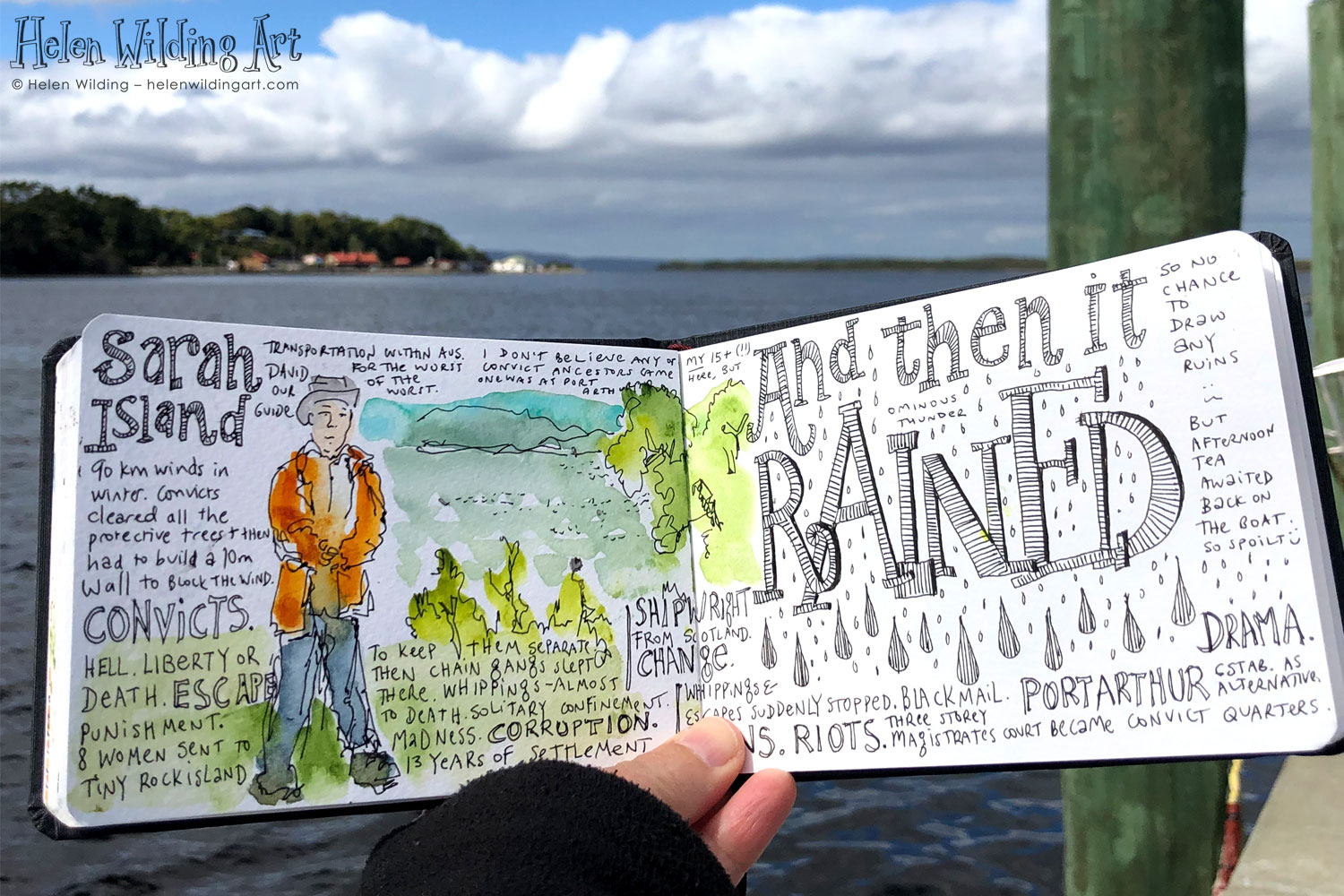 Given the dodgy weather the next day we decided to visit the West Coast Heritage Centre in Zeehan, about half an hour from Strahan. Zeehan was once a busy mining town with a population of 10,000 but that is now down to about 700. Regardless, the museum is fascinating and has everything from mining paraphenalia to an old Mason’s hall (contrary to popular myth masons apparently don’t ride goats), police station (complete with perfectly crisp photos on criminal records from the late 1800’s), and theatre. You could easily fill an entire day if you wanted – or months with a sketchbook! 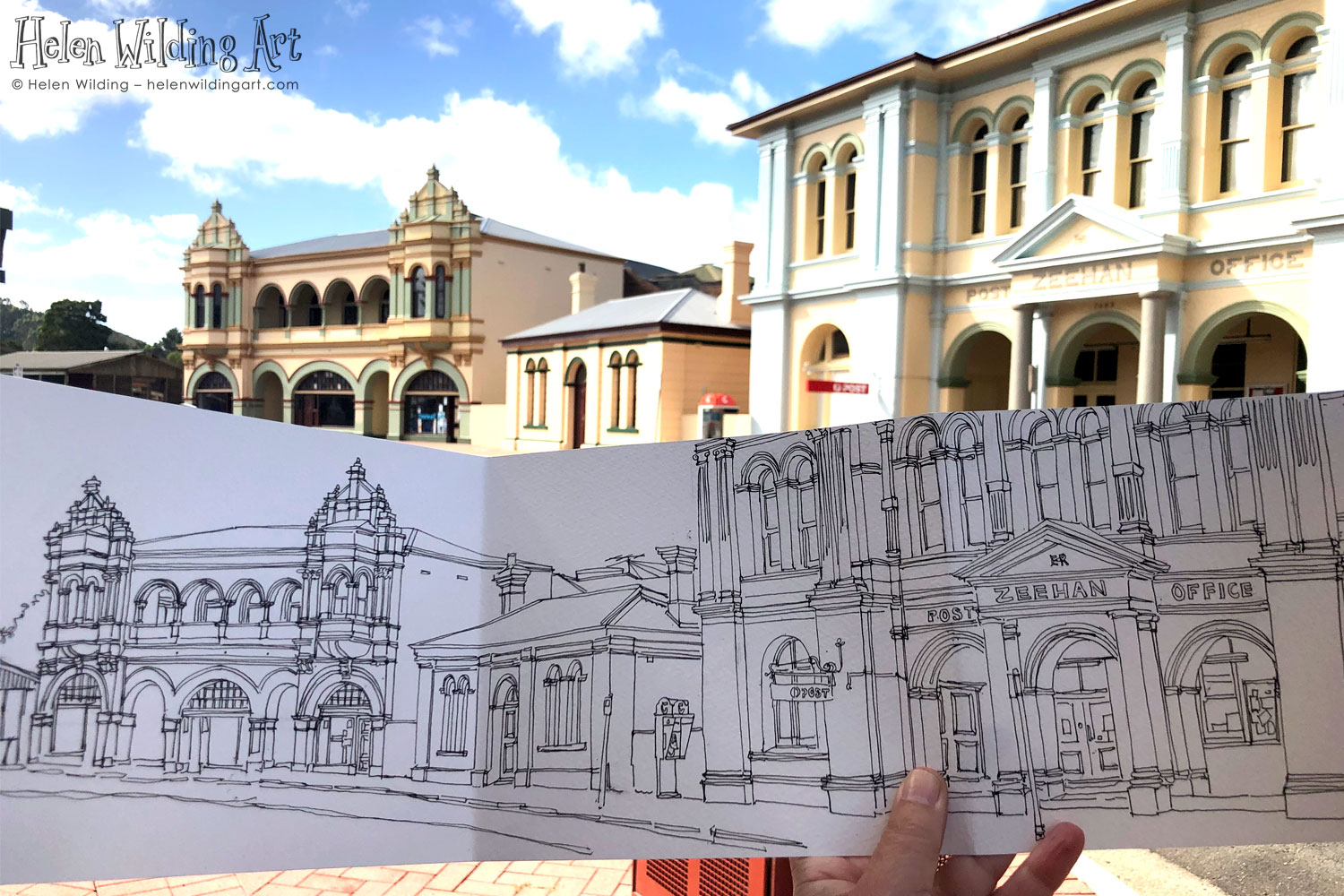 Just like in Queenstown the streets were deserted, but the buildings were so gorgeous that I couldn’t resist grabbing one of the dusty chairs outside the abandoned pub opposite the museum to settle down for a quick sketch. Stephen knows what that means, so he settled down in the car for an afternoon nap. Surprisingly (!!) it took longer than expected to draw the streetscape, and I didn’t think it would be fair to spend another hour there adding colour, so that is for another day. Just as well we packed a picnic.

On arriving back in Strahan I received a message from a fellow Melbourne urban sketcher, Angela, who said she knew the owner of the Stormbreaker, a sailboat based in Strahan that does overnight trips of the Gordon River. Stephen immediately knew the sailboat she meant, and so I made an attempt to souvenir it in a drawing before we left. It doesn’t LOOK like it was windy until you see the video with my page trying to take off.

The ferry trip back to Melbourne was thankfully much smoother than the way over, but I was a little nervous when they announced it would be a little bouncy! We arrived on time at 6.30 am and I started work at 8.30. One of the benefits of working from home is that you can shower whenever you like!

I felt we saw and experienced a lot during our short Tassie trip and it was such a welcome break. Thank you to those who sent tips of things to see, do and eat (especially eat) during our trip. And thank you Tasmania and Tasmanians for being truly excellent hosts to a couple of lockdown weary Melburnians 🙂 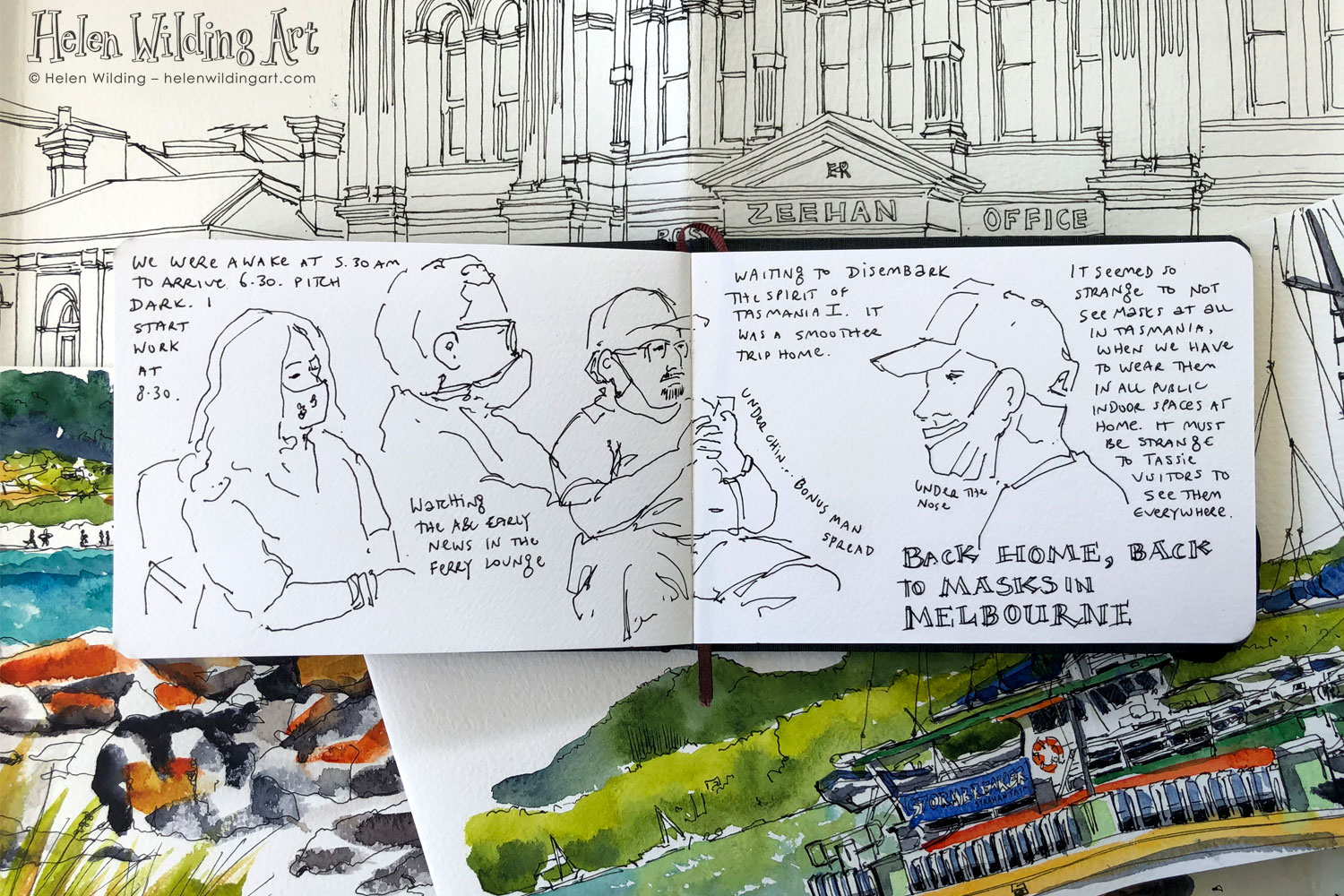