We had a really comfy Airbnb in Hobart overlooking the Derwent River. The natural consequence of the view was a big hill, so we timed our outings to walk downhill into town and then at the end of the day we caught an uber back up again!

This was the view from our balcony. I had a little bit of view envy for the apartment upstairs who weren’t blocked by trees, but it was still pretty stunning. 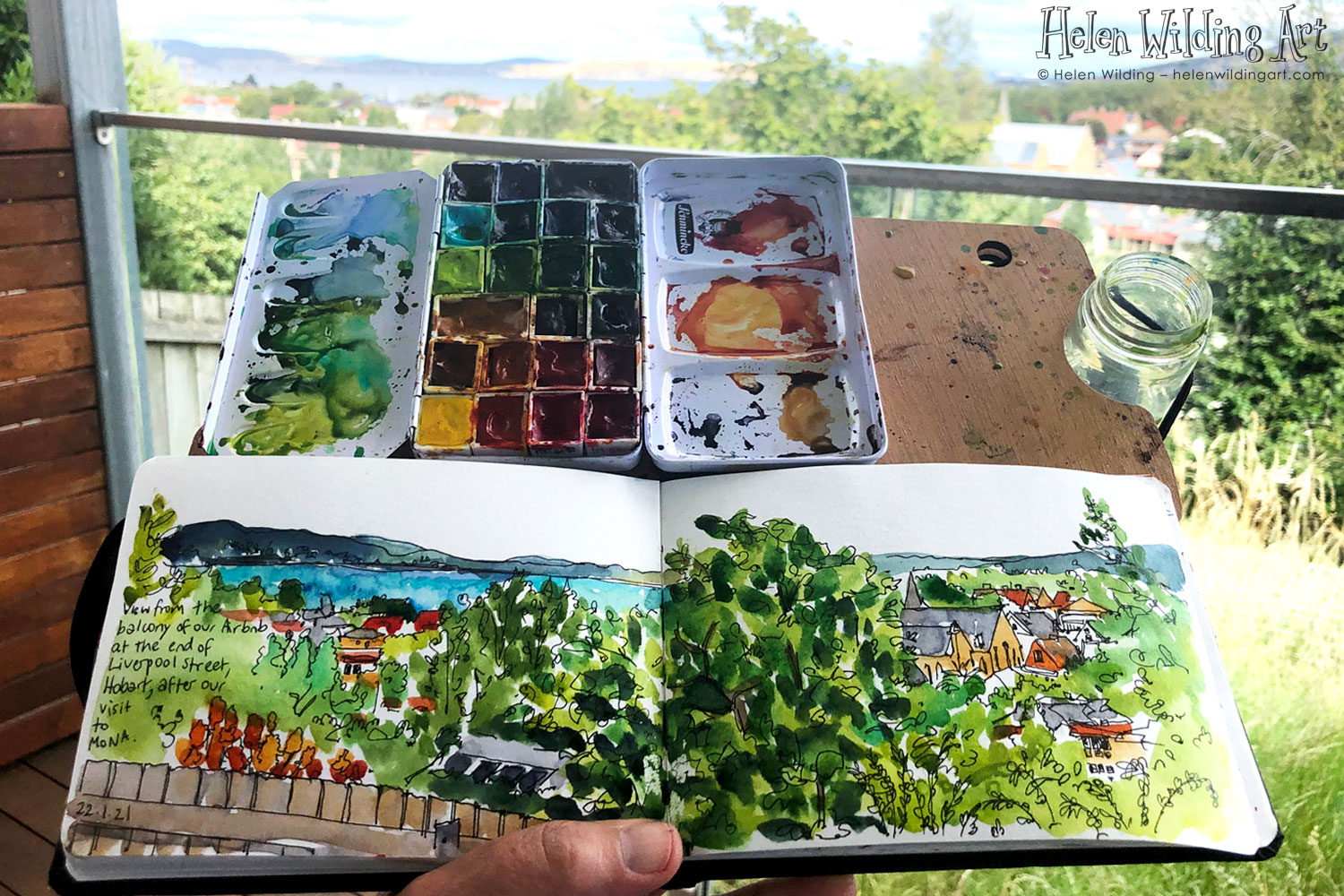 My boss had recommended brunch at Jackman & McRoss, a bakery in Battery Point. It was a lovely sunny day, so perfect to sit outside and draw the little old cottages. The buildings in this area were much less ornate than the ones I am used to drawing at home in Melbourne, but there is a comfortable solidness about them that I imagine would sit well with being so close to the Antarctic. Of course ‘close’ is relative. It’s over 5,000 km, but nothing much else in between.

Surprisingly, during our trip we were told that Hobart was the third sunniest city in Australia. Even more surprisingly, it was a Melbourne native who told me that. I have no idea where the information came from, whether or not it was true or fake news, or what ‘sunniest’ was defined as … but certainly we couldn’t complain about the weather while we were there.

Oh yes, I nearly forgot – I got a lamington at the bakery, doing my duty of course to compare quality. The highlight of this one was the jam – I hadn’t realised that Tasmania has the most amazing berries and cherries, and of course this extends to super tasty jam. The lamington was so big that I had to take most of it away to finish later. I nibbled at it for the next two days and still didn’t manage to eat it all. So maybe Tasmania should be home to the “Big Lamington”? *

*An Aussie joke, as we have these strange ‘big’ tourist attractions dotted around Australia, such as the Big Banana, Big Pineapple, Big Sheep, Big Galahs etc. They sit beside the main highways in unexpected locations. Totally tasteless. Yet everyone passing HAS to stop and take a photo next to them. 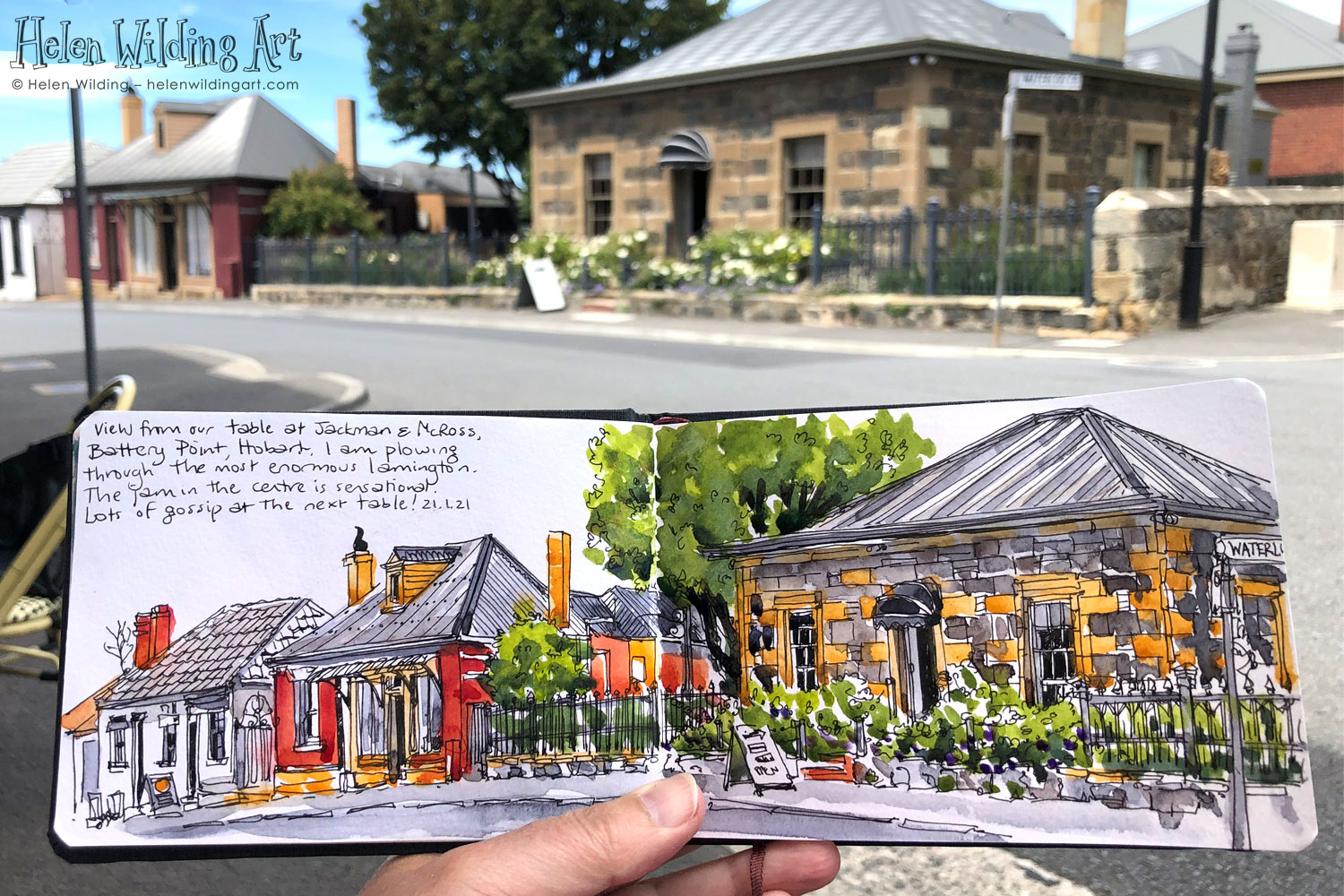 Walking through the center of Hobart I was continually looking up at the buildings for inspiration. There were plenty of gorgeous views, but none were going to fit nicely into my little sketchbook. Then we wandered into a mall and there it was … The Little Flower Van – a teal blue caravan and flowers, flowers and more flowers. A chance to use all of my favourite colours!! There was even an empty bench in just the right spot. I couldn’t resist.

Thank you to the florist who put up with the strange woman staring at her for about an hour as she served customer after customer. And yes, there really were customers in those co-ordinating outfits! 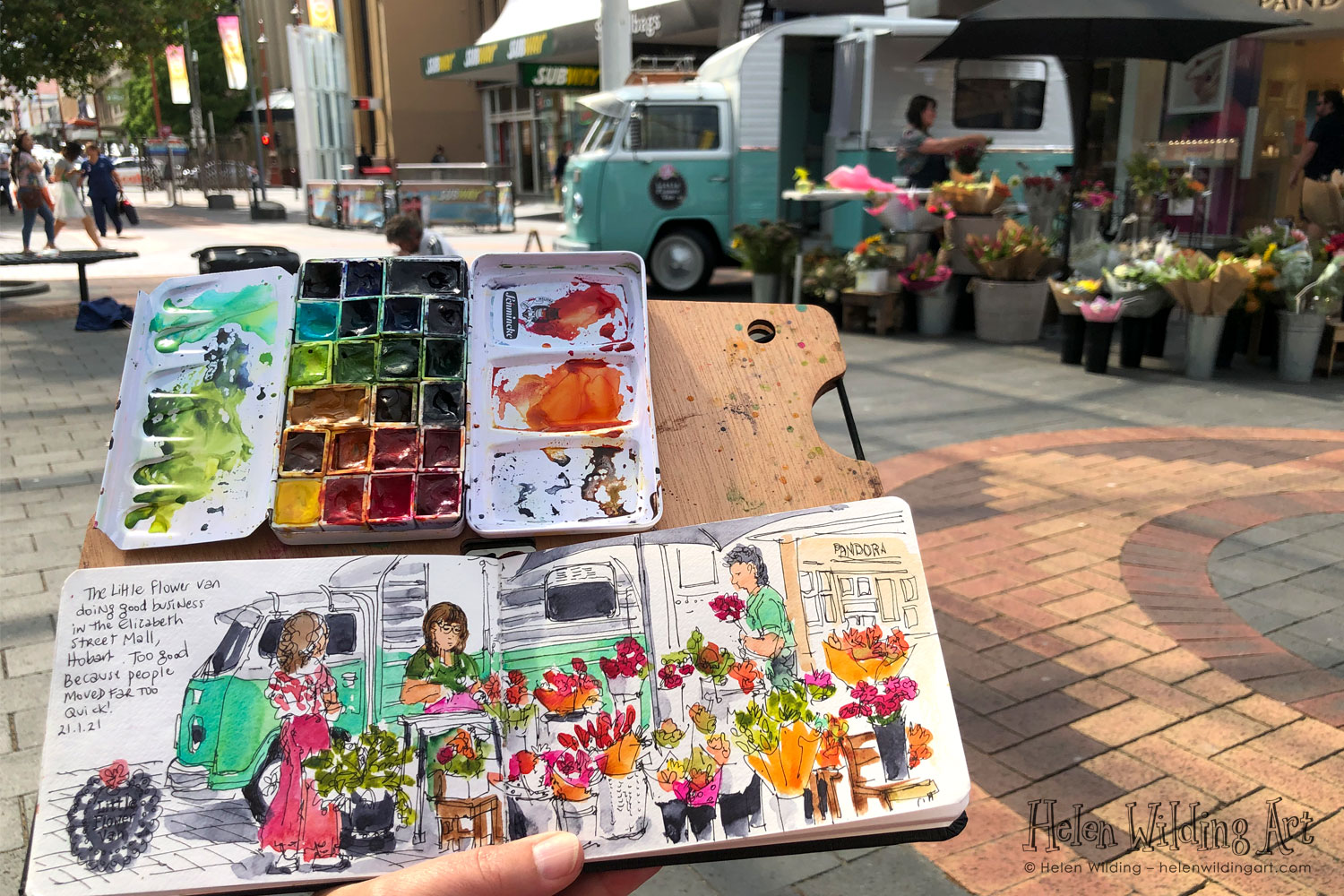 The little plywood board under my sketchbook is my favourite purchase of 2020. It is a StablO easel and it lets me slot my sketchbook at the front, holding it nicely open, and a hidden magnet holds my palette secure. I pop a little plastic cup (not much bigger than an old film canister) into the elastic at the side, and I’m ready to go. It makes such a difference to have my paints sitting in front of me rather than having to bend over to reach my palette and water on the ground. I don’t tend to draw with it so much, because the book is enough on its own, but when I start to paint it is fabulous. Just in case you were wondering!

Over a couple of evenings I sat in the street just above our apartment to draw the view over the Derwent River. It was seriously amazing and definitely deserved one of my long sheets of paper. We were at the end of Liverpool Street, and I quickly looked in Google maps for the suburb which I clearly got wrong in my haste. It is in fact west Hobart. Oops. The nice thing about that is I was corrected by someone who recognised the view from my drawing!

We visited Mona – the Museum of Old and New Art. It is the largest privately owned museum in the southern hemisphere, and designed to shock and delight right from the very first minute. Tasmanians making a booking can visit free, but they need to put down a small deposit for booking. Afterwards they can get a refund, or donate it to the owner to “pop straight on the doggies”. No, we aren’t Tasmanian, but this irreverent humour (often very dark) was obvious throughout. A text message from a higher being confirmed our booking. It made me laugh out loud. We were certainly in for a ride.

Every single thing was unexpected. You can walk past an ancient Egyptian relic sitting next to a Monet, sitting next to a wall of personal female bits (I just don’t want to get into trouble here). Well the arrangements might not be quite like that, but you get the idea. There is a poo machine which gets fed in the morning and poos in the evening. Even in the toilets there was a soundscape clanking away as if tiny engineers were working on the plumbing, mumbling away and then exclaiming “Good one!”. Was that to me??

My favourite bit was when a powerful looking woman guarded a room surrounded by heavy velvet curtains. This was a room for women only she announced with gutteral authority. Was there a little glare at Stephen, or did I imagine that? There was no doubt that she wasn’t letting a mere male past her. I entered the secret space and much more than the contents of that room (which surely have to remain secret), it was a strong reminder of the number of times when women are shut out of places, jobs, conversations and the like, either intentionally or not. Food for thought indeed. Just marvellous. I felt just that little bit more empowered when I re-emerged through the curtains to a knowing smile from the guard.

My brain was so over stimulated in just an hour that it took me half the afternoon to recover and think straight again. Art may or may not be your thing but it really doesn’t matter. It is a must see. I especially wish my dad could have seen it.

Urban sketching around Tasmania, part 2: Bicheno and the eastern beaches