Sketches and history of the Belvidere Hotel, 77 Victoria Parade, Fitzroy

I was caring for my dad when I first started drawing Brunswick Street, Fitzroy.

It was late 2018. Dad lived in Bourke Street, right near Parliament House, and our family was taking turns supporting him to stay at home during his last months. When my brother dropped in for lunch I took the opportunity for a break and wandered up to Victoria Parade. I set my stool up on the tram stop, with an uninterrupted view looking directly down Brunswick Street. It was an almost perfectly gorgeous Melbourne day, with gentle sunshine and a soft breeze, trams coming and going with the occasional ding at unwary pedestrians, and the clickety clack of the crossing signal.

Sinking into my drawing of the old Eastern Hill Hotel on the left, and the brand new Australian Catholic University on the right, was exactly what I needed at that moment. It took my focus in a different direction, and let me switch off my anxiety and exhaustion, while I concentrated on the lines, windows, and decorative swirls of the walls in front of me. Urban sketching is a wonderful way to meet people, but equally it is a great way to be quiet and mindful of the world around you.

In January 2019 I came back to the same corner, sitting in the shady stairwell of ACU to get the best view of the building. It was my third go at drawing the same place, and I still think it is funny that sometimes I drew it tall and long, and other times I drew it short and fat! I think that answers any questions you might have about perfection 🙂

This time I came prepared with a long strip of folded Bockingford watercolour paper, with a vague idea of drawing at least one section of Brunswick Street. I couldn’t have imagined that two years later I would be exhibiting that drawing, along with many others, as part of a major project to draw (one day) ALL of Brunswick Street, Fitzroy. I call the project my Brunswick Street Sketchography. Yes, sketchography is a made up word, but I think it nicely sums up the idea of sketching on location and also writing about the history of a place.

This is a record of that first morning.

I added the watercolour at home later on. This is the limited edition print of my finished sketch. It was the very first streetscape in my Brunswick Street Sketchography. It’s interesting to see how my style has adapted over the years. 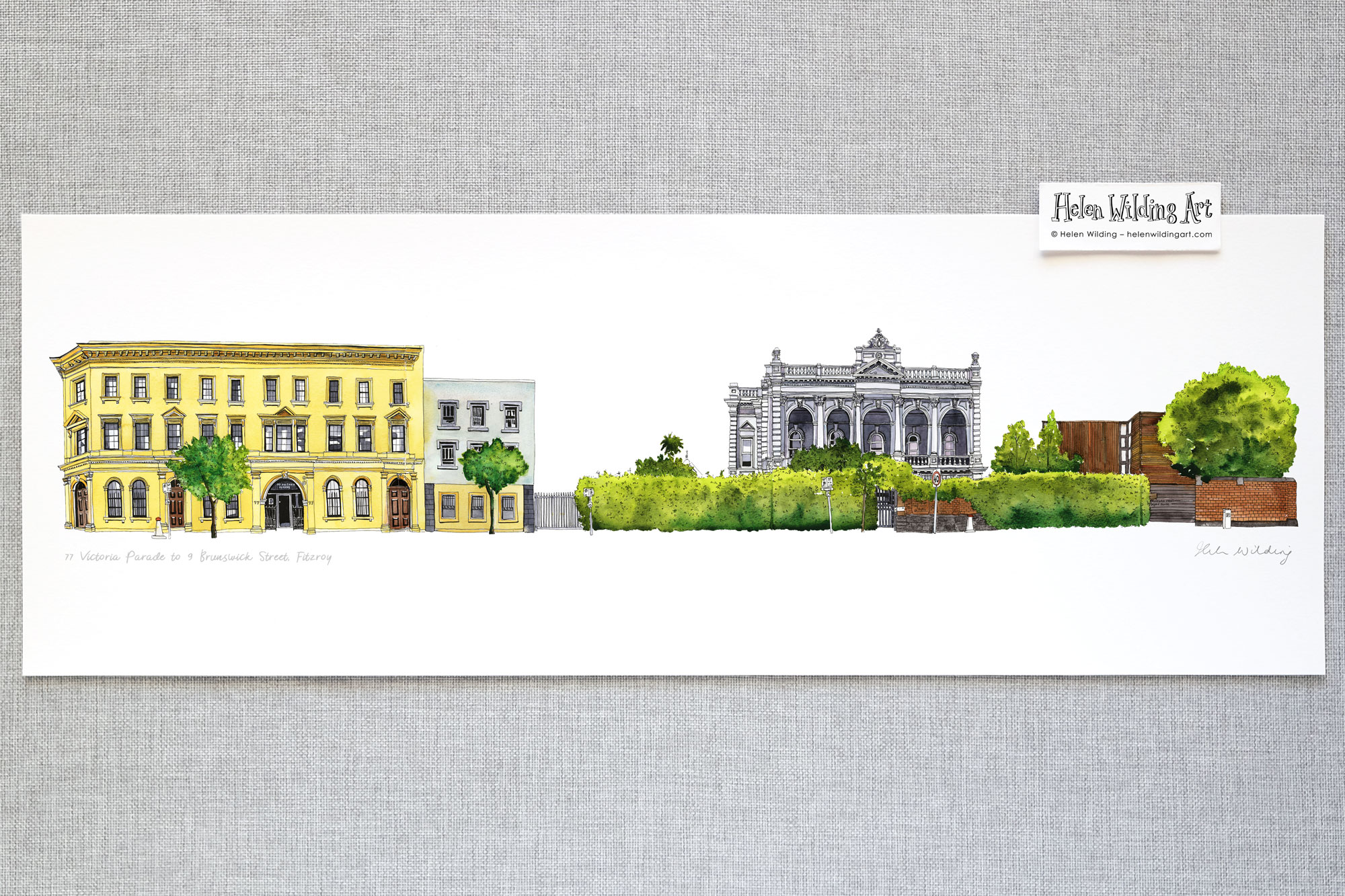 I’m a research librarian by profession, so I couldn’t resist doing a little browsing on Australia’s National Library website, Trove, which is rich in gossip – sorry, I mean historical newspaper articles. I knew a little bit about the yellow(ish) building at 77 Victoria Parade. It was the birthplace of union demands for an 8 hour day – 8 hours work, 8 hours play and 8 hours rest. But I didn’t realise that it had  housed and entertained some slightly dodgy locals over the previous century. Not that it is surprising – this is Fitzroy, after all.

I hope you enjoy what I discovered. I have set little snippets out in chronological order – don’t feel obliged to read every newspaper article in full. Just zip to the bits that interest you.

The Union movement had their early meetings at the Belvidere. It is pretty amazing how early they started planning industrial change, as it was in the very first years of the British settlement of Melbourne.

This year’s celebrations take place next Monday, 18th inst., and it should be a record turn-out, for the atmosphere at present in the Trades Union Movement should strike iron into our present-day men to uphold the good work our early spade-workers did in the fifties. Their meeting place, before they got a block of land to build a hall on was the Belvidere Hotel, corner of Brunswick and Victoria-streets, Collingwood (now Fitzroy).

On Whit Monday, 1856, the first move was made in forming the Eight Hours Anniversary Committee, when our pioneers journeyed to the Cremorne Gardens, Richmond, known in those days as the Vauxhall of Victoria. -One of the principal forms of amusement was a scene of the Bombardment of Sebastopol, and research news tells us that the attendance was about 1,200.

It was the following year that our Movement really got its first start. On April 21st, 1857, from the Carlton Gardens (now the Exhibition) our pioneers marched to the Cremorne Gardens, where now stands the Rosella Jam Factory. They marched along Nicholsonstreet, down Bourke-street, along Elizabeth-street, up Collins-street, to Bridgeroad, to the Gardens. Nine trades formed the procession; in the following order:— The Stone Masons, Bricklayers, Laborers, Quarrymen, Coachbuilders, Painters, Plasterers, Joiners, and Plumbers. The banners were all surmounted by a knot of black crepe, as a mark of respect to the memory of Lady Barkly (who was the wife of Sir Henry Barkly, Governor of Victoria). The Stone Masons’ and Coachbuilders’ banners won pride of place, anji the Masons had the largest numbers in the line. For in those days they were the stalwarts, and in their early history they frustrated the move of Messrs. Cornish and Bruce, the contractors for the new House of Parliament, in bringing men from overseas to reduce their standard.

When the vessel arrived with one hundred masons on board, Mr. Cornish was soon’ on deck to welcome his new employes. The local masons soon got aboard the vessel also, and told the new arrivals that labor contracts overseas were not binding at the port of destination, and it was not long before they were made members of the Masons’ Society of Victoria. It was this move that was one of the strengthening links of the Victorian Trades Union Movement or that period.

Another hit was made at the Coachbuilders by William Williams, a railway carriage contractor, on May 4th, 1859, and our men got a temporary setback, but they soon got on their feet, and their banner was seen in the ranks of the anniversary celebrations. Space will not allow us to detail further events. But let the general public look at our present building at the corner of Victoria and Lygon streets. It is our deeds which speak louder than words.

In conclusion, brother unionists, let me again remind you to get behind your banner on Monday next, and show the people that the sons of the pioneers have the grit and determination of their forefathers well and truly planted in them.
A. L. 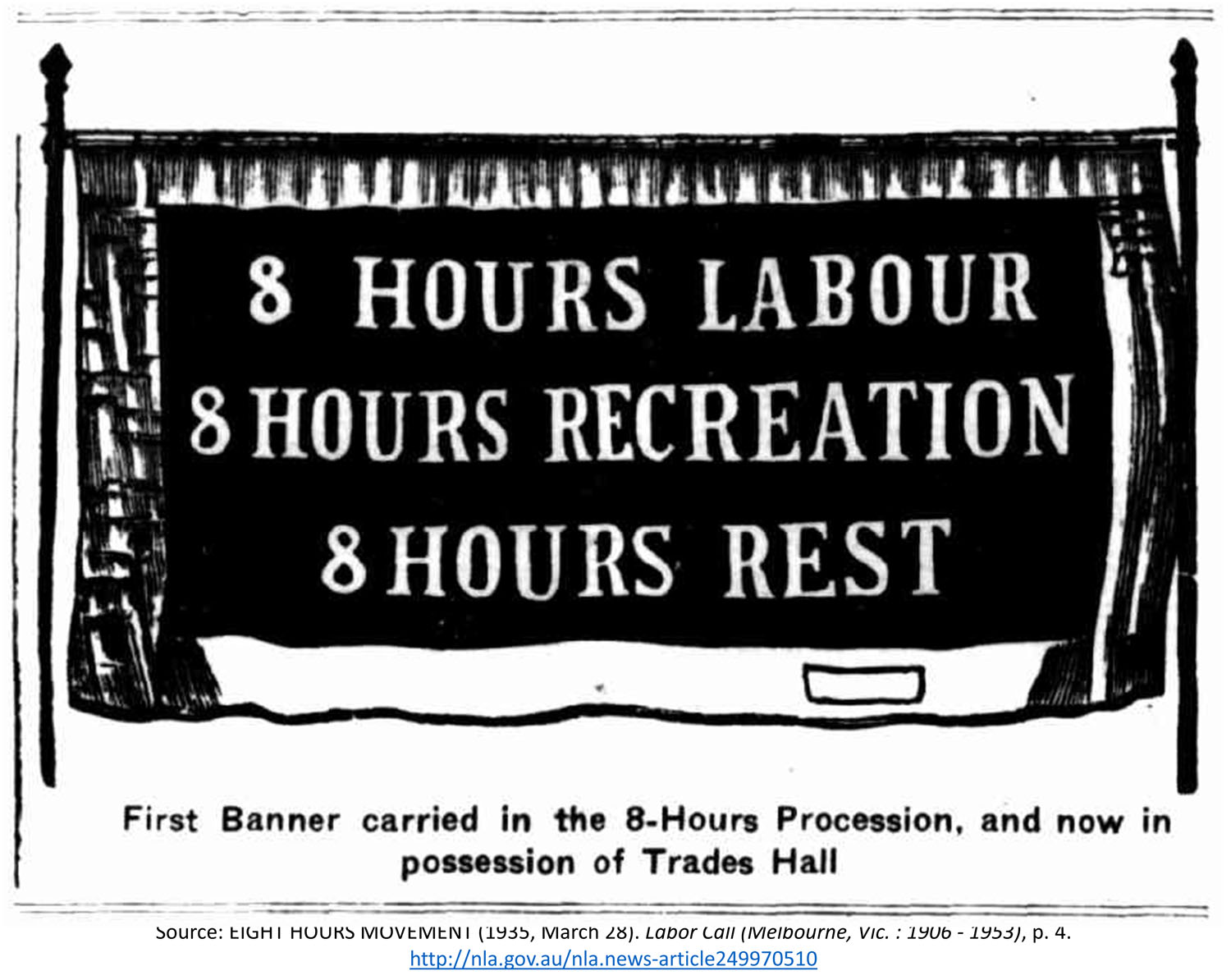 Gentlemen in top hats and bowlers pose outside the corner entrance of the building, framed by horse drawn carriages politely waiting on either side. Swipe the picture to see a close up of their portly bellies. I love to imagine what they might have been thinking … 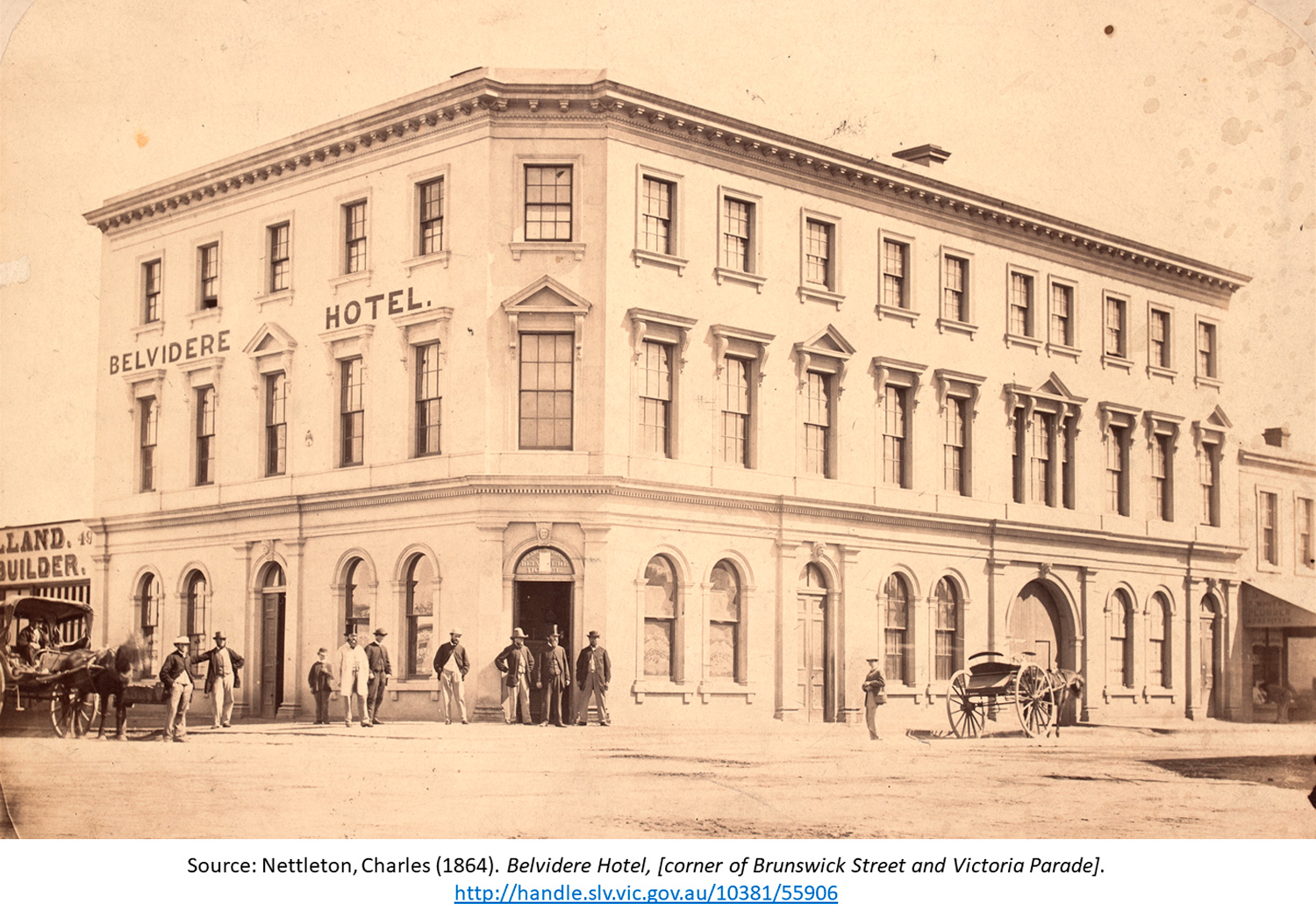 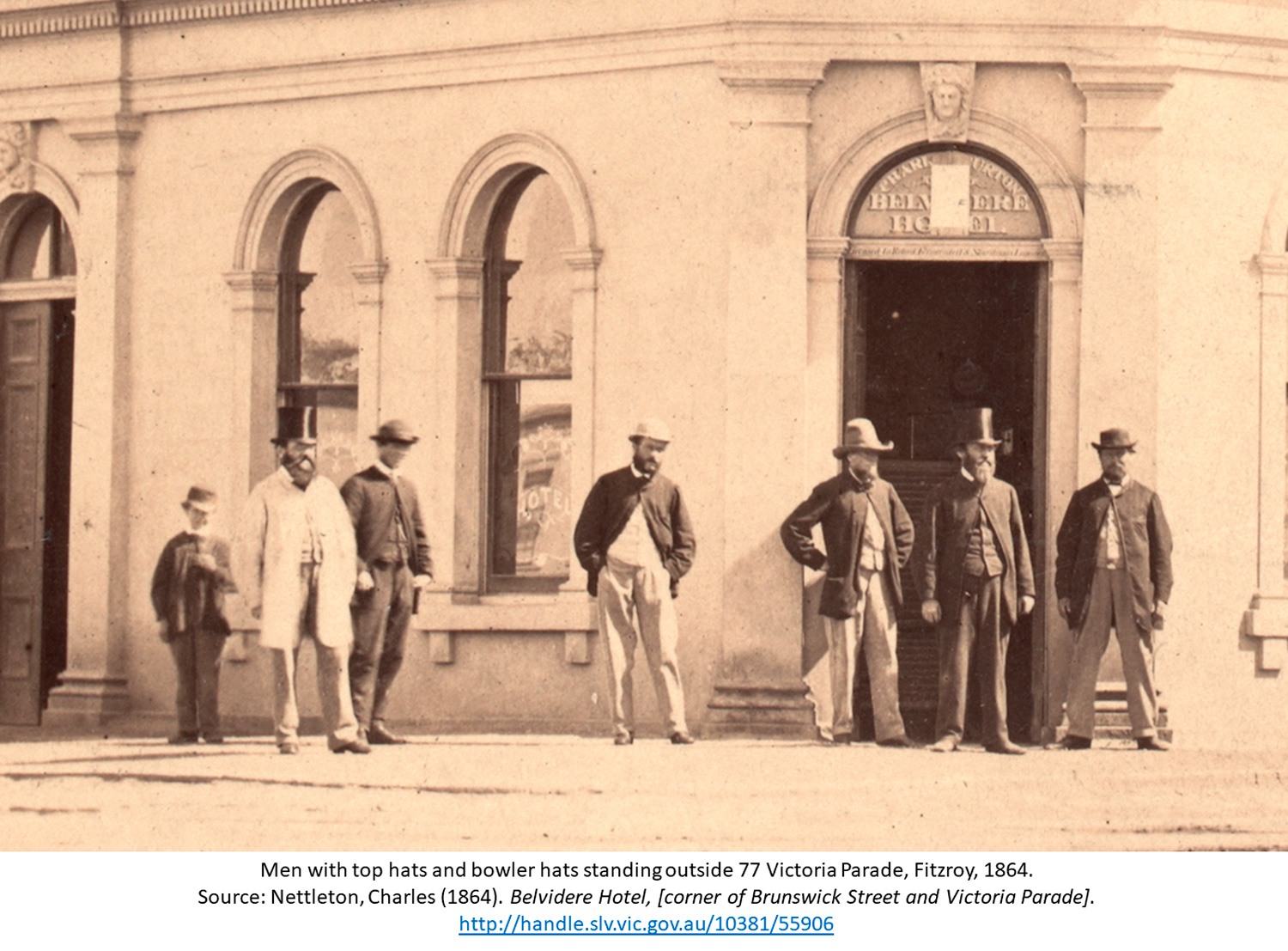 Melbourne was flooded in 1881, and the storm overflowed the plumbing at the Belvidere. I love how dramatically romantic the reporting was in those days. Time for a little renovation around the billiard table …

FLOOD IN THE MELBOURNE STREETS.

The heaviest flood that has occurred in the city for a long time took place last night about 9 o clock . The sky during the evening had worn a threatening appearance, and about 8 o’clock a terrific thunderstorm broke over the town. The rain descended in a per-fect torrent for nearly an hour, and a serious flood was the result. The low portions of the city were quickly submerged, serious damage being done to property at the south end of Elizabeth and Swan-ston Streets. In both of these streets the water was flowing in one broad stream extending from shop-door on one side to shop-door on the other, and in many in instances the water entered the dwellings, in spite of the precautions which had been taken.

The Belvidere Hotel, Fitzroy, suffered con-siderable injury from the storm. The spout-ing overflowed and the water fell on to the ceiling of the billiard room, the result being that large patches of the plastered ceiling fell to the floor with a tremendous crash, which greatly alarmed the inmates. The water, having found access through the ceiling, poured down upon the billiard table, injuring it considerably. 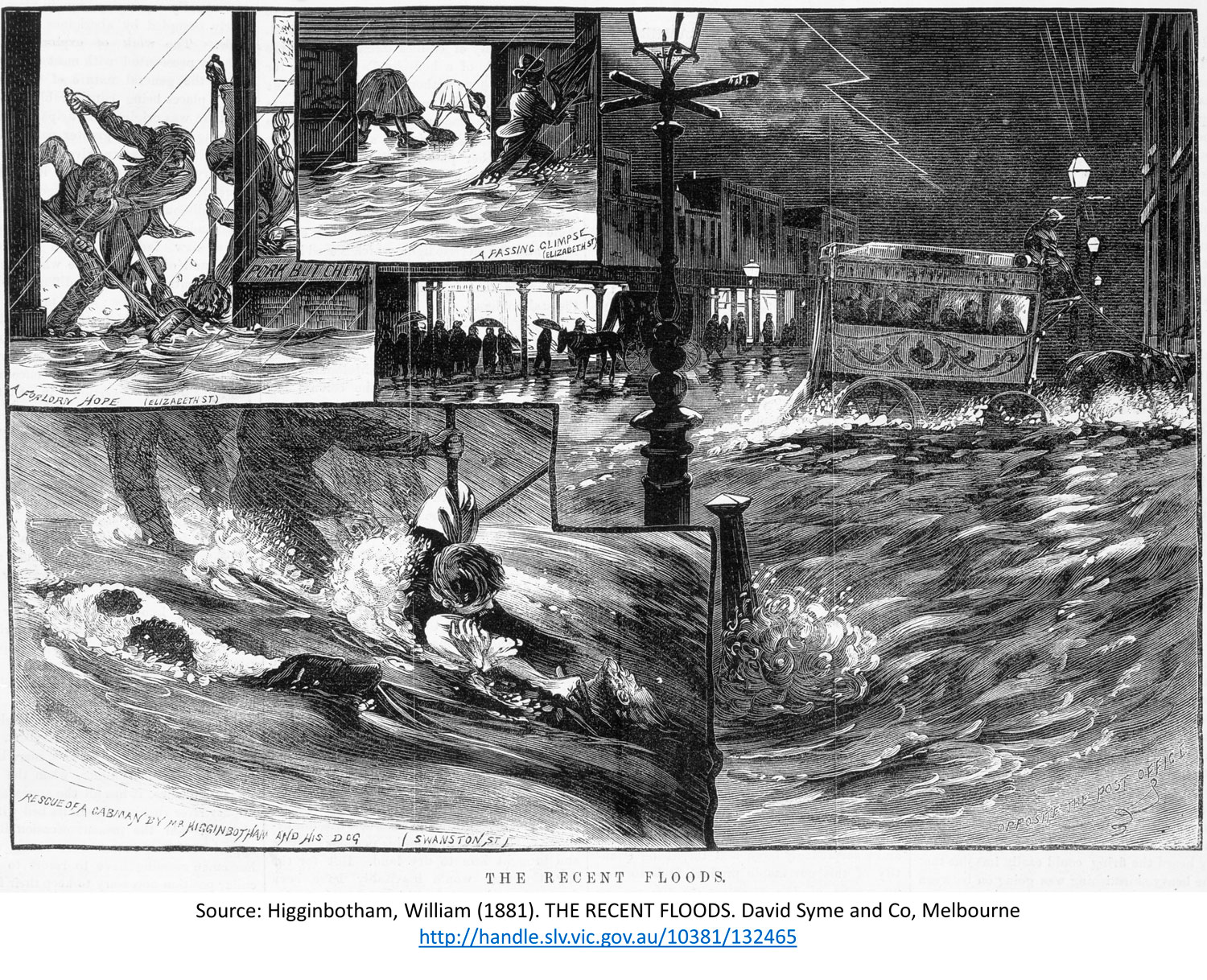 Police discovered women of “bad character” and “ill repute” in the Hotel in 1885. Interesting how these women were invited into the Belvidere Hotel by men, and yet those men seemed to be of excellent character and innocently misled. Of course.

The licensee of the Belvidere Hotel, Victoria-parade, was summoned to the Fitzroy Courtroom Monday to answer a charge laid under the 55th section of the Licensing Act, of having permitted his premises to be used for an improper and illegal purpose. The section in question provides that women of bad character shall not be permitted to remain in an hotel longer than to obtain reasonable refreshment, and section 77 of the same statute gives any superior officer of police or justice of the peace power to enter hotels at any time of the day or night for the purpose of inspection. On the night of the 22nd ult., shortly alter midnight, Sergeant Curran and a body of police armed with an authority from Inspector Daly, entered the defendant’s hotel, and found a large number of unmarried people of both sexes occupying the rooms. The police recognised some of the women as being of ill repute. There was liquor in some of the rooms, and some of the persons had been partaking too freely. The defendant told the sergeant that it was very hard that he should be singled out for prosecution. The defence set up by Mr. Walsh, his counsel, was that he had only recently arrived from New Zealand, and did not know the character of the people who had falsely represented themselves to him. Evidence was given that he bore an excellent character, and that he conducted the hotel respectably. Mr. Walsh also submitted that the 55th section of the act was aimed at disorder and riot, and in this case there had been no disturbance in the house. The Bench held the charge proved, and inflicted a fine of £20, with £5 5s costs. Sir Bryan O’Loghlen conducted the prosecution.

The centre smoke stack in this scenic map from 1889 marks the corner of Victoria Parade and Brunswick Street where the Australian Catholic University is now. The big white building on the other side of the street is the Belvidere Hotel. It barely seems to have changed. The detail in this view is pretty amazing. Swipe the picture to see a close up of the intersection. 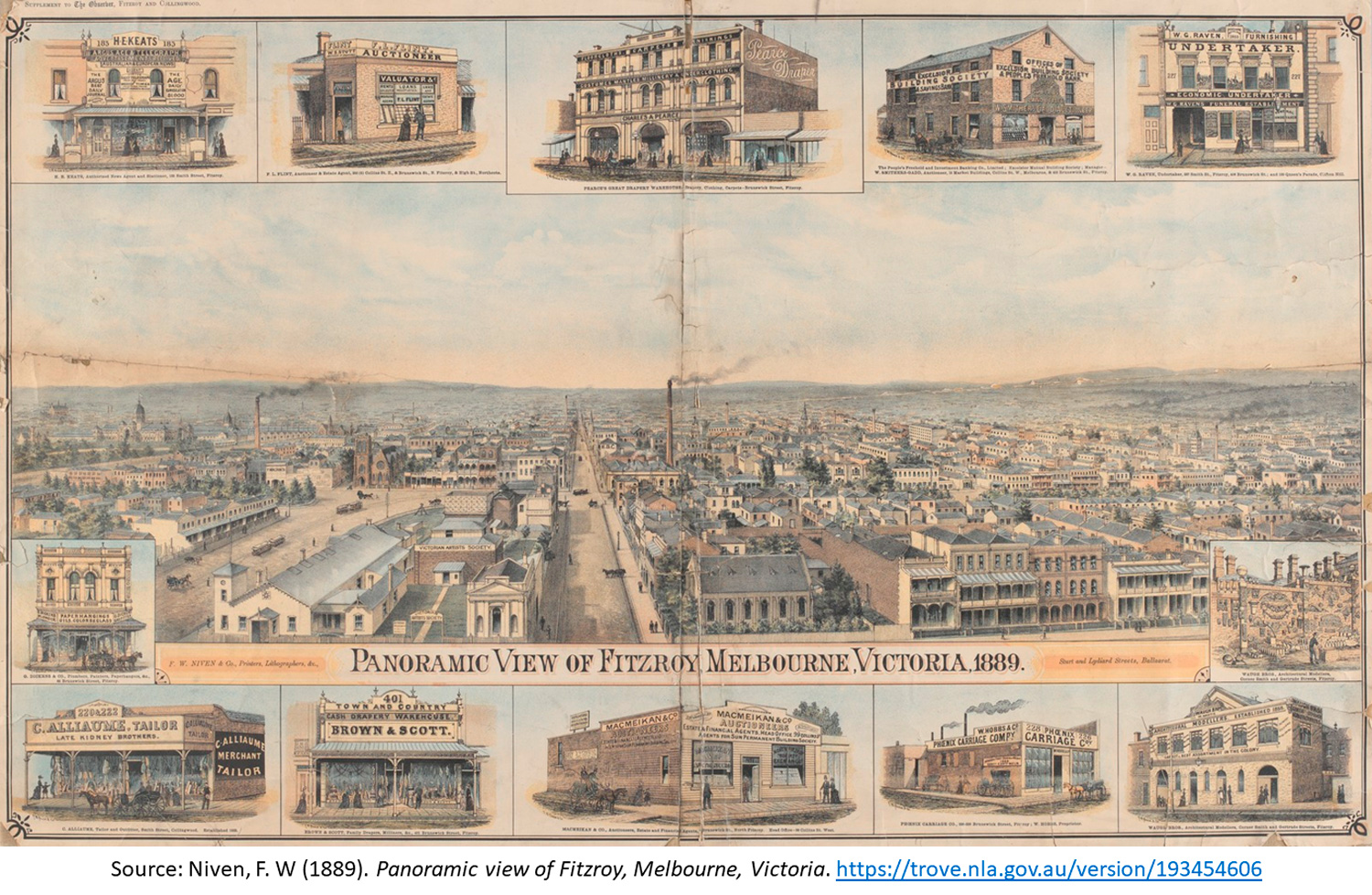 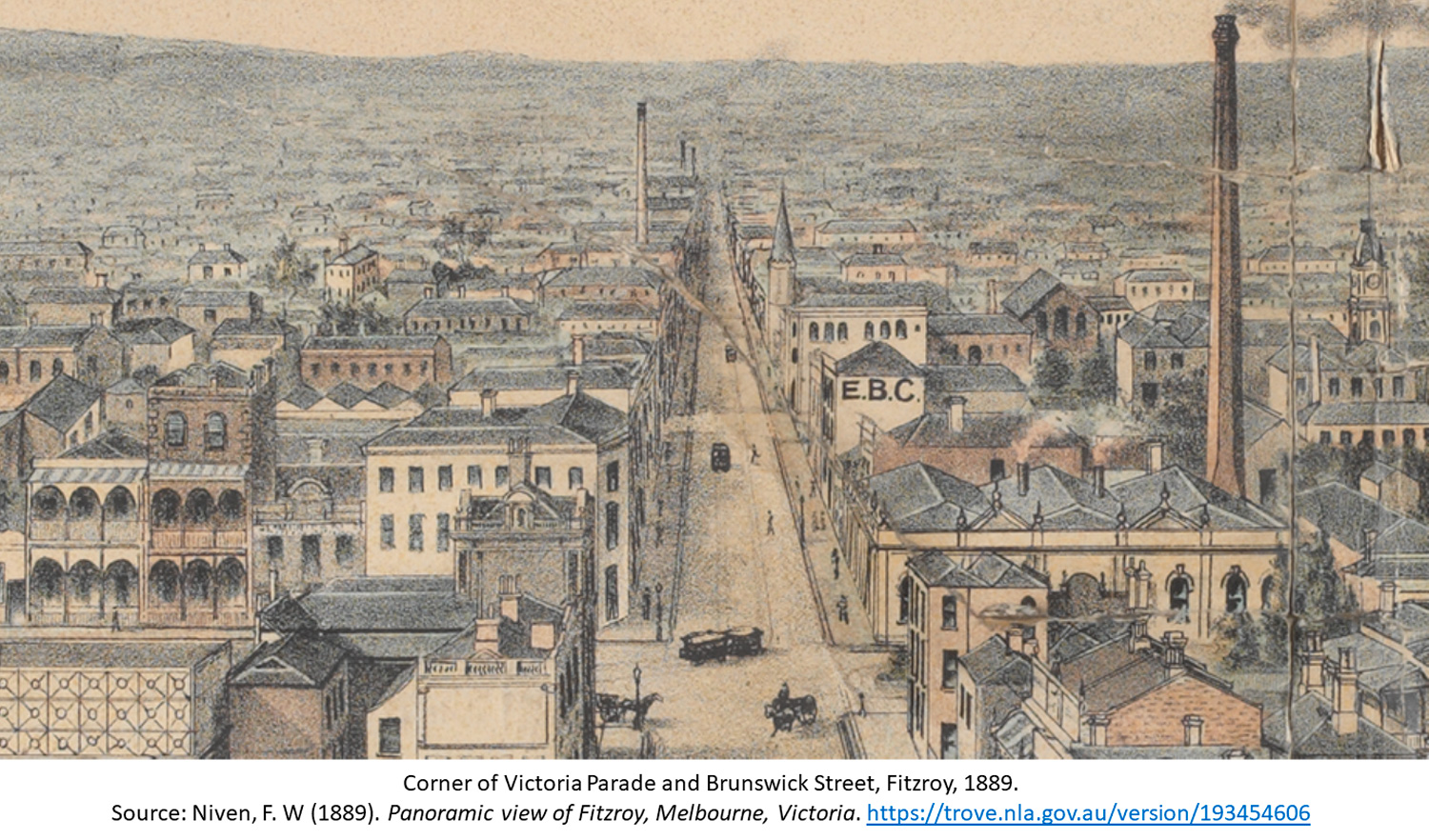 A tram passes the Belvidere in 1891. Swipe the photo to see a close up. Why are all the passengers men? 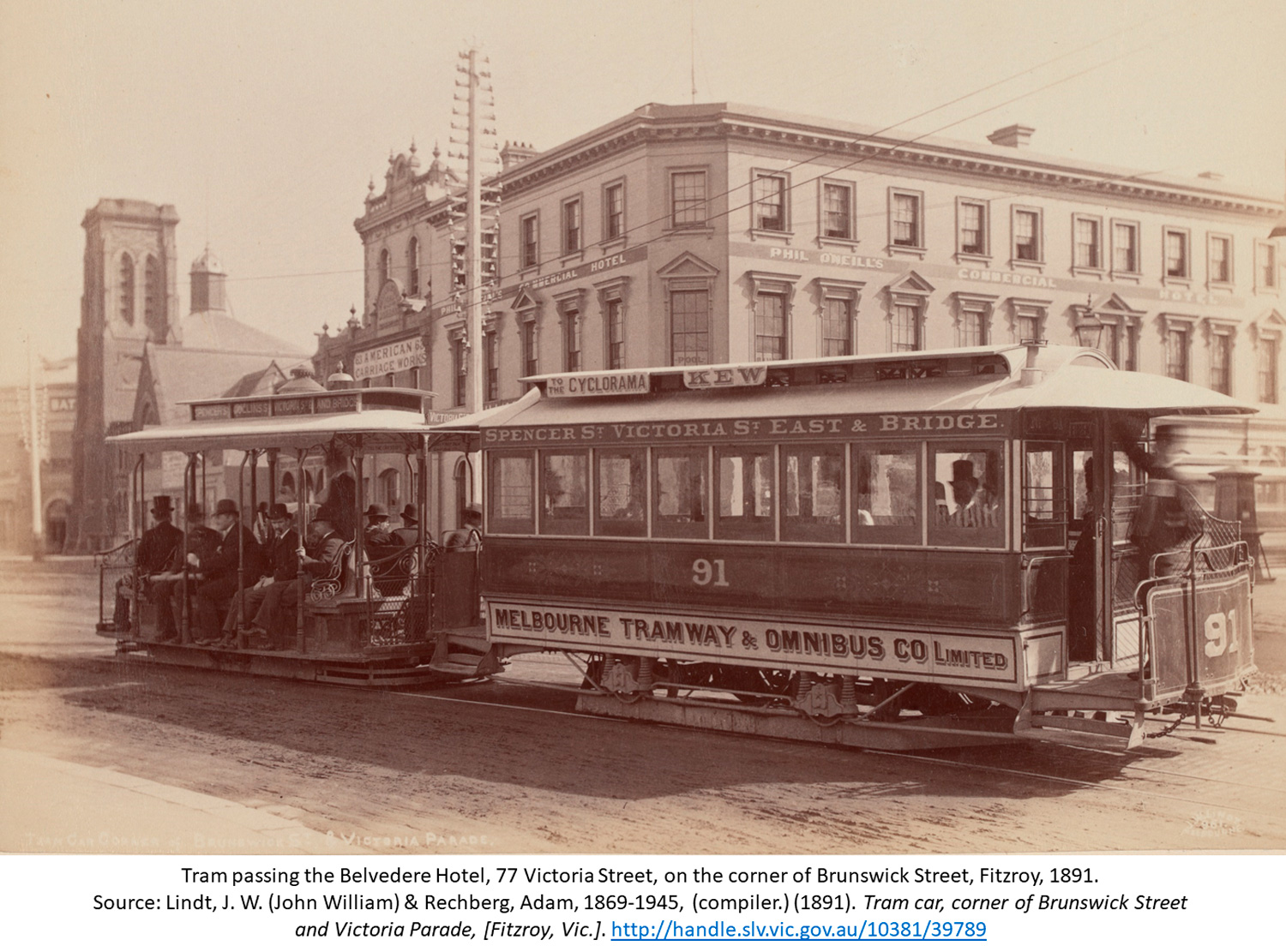 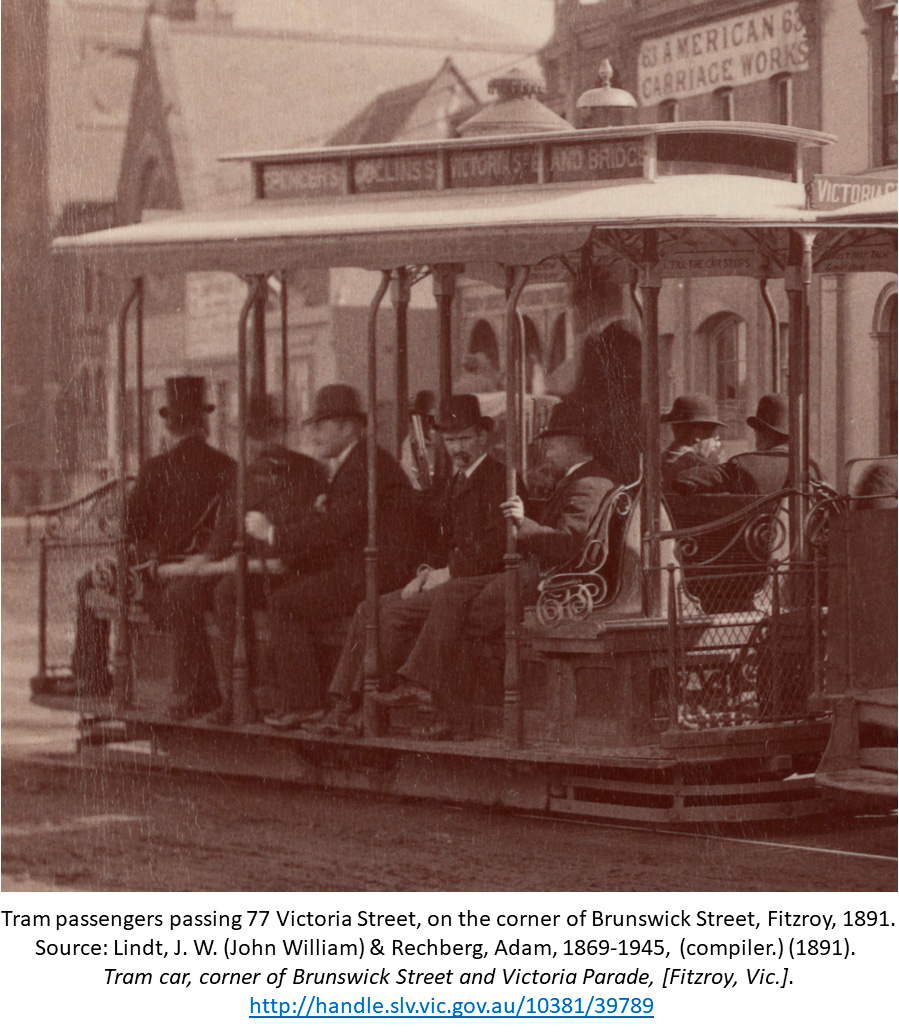 Do you have anything else to share about this building? I’m happy to add in more stories, or you can comment below. And gossip? Oh I love a little bit of vintage gossip – as long as we keep it decent!